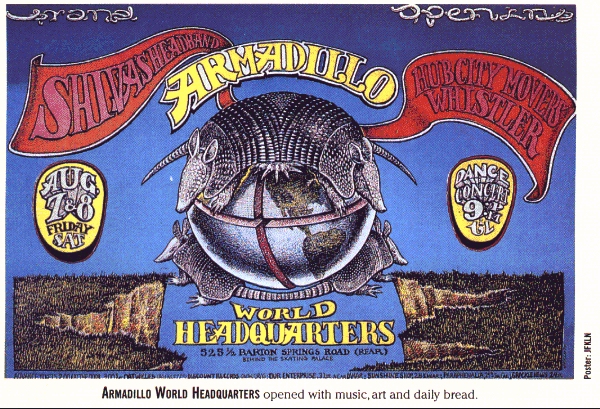 Armadillo World Headquarters has been closed now longer than it had ever been open, yet it is still spoken of with reverence whenever the history of music in Austin, Texas is brought up. Many things made this cavernous, unglamorous, 1970s concert hall so special, not the least of which were the communal spirit that drove the place, the subcultural niche that it carved out for a growing breed of cowboy / hippies, and, of course, the incredible amount of tremendous music. In 1969 the great Austin concert hall, Vulcan Gas Co., closed its doors after three years of 13th Floor Elevators, The Conqueroo, and nationally known acts like Canned Heat and Johnny Winter, who recorded a live album there. Eddie Wilson, manager of the psychedelic rock band Shiva’s Headband, wanted to keep the music coming by finding a new home for it. He had grown up in central Austin hanging out at Kenneth Threadgill’s Service Station where the Wednesday night hootenannies had been all the rage. Wilson wanted a new musical outlet for the city, but he didn’t really choose the former National Guard armory in South Austin that was obscured by a skating rink. “It chose me while I was taking a leak,” Wilson remembers. “I was behind George’s Cactus Club, standing between John Reed and Jimmie Dale Gilmore [then a member of the Hub City Movers]. We were out back in a parking lot, and saw broken metal framed windows at least twenty feet off the ground. I thought, “My Lord, there’s a giant building there.” We were looking at the east side of the National Guard armory. I went around to the west side and discovered a garage door. I raised the garage door, drove my car in it, shut the doors behind me and turned on my lights. I had a real hallucinogenic moment there as I, first time, gazed on the inside of Armadillo World Headquarters. I knew immediately that I’d found the place.” 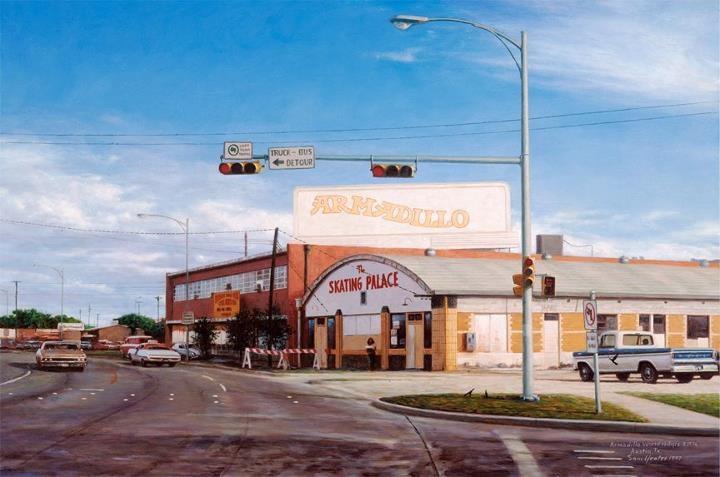 The building already had quite a musical history. After being a National Guard armory, it had been The Sports Center, hosting wrestling and boxing matches, with occasional package tours coming through. Little Richard and Jerry Lee Lewis had played there, and one show in 1953 had included Faron Young, Johnny Horton, and a kid named Elvis Presley.

Shortly after Wilson’s discovery, he and a few partners got the whole thing started. “Cheap rent made it possible,” declares Wilson. With the help of that cheap rent and some recording contract bonus money that Shiva’s Headband had just landed, Wilson and his merry band of hippies proceeded to open the place on August 7, 1970 with the imaginative name that certainly didn’t hurt in the recognition department.

Thousands of artists played at the Armadillo between 1970 and 1980, many of whom built their careers by being heard there, others who could have filled up basketball arenas but instead chose the place that they knew would allow them intimacy with an attentive audience something that couldn’t always be achieved elsewhere.

The room held about 1,500 people, most of whom would just sit on the big floor in front of the stage covered with sections of carpet pieced together. The place caught on fairly quickly as the little haven where the anti-establishment types could feel at home, and develop what was becoming their hedonistic music/ pot/beer-based lifestyle. “The lifestyle itself was an accepted art form in Austin and people set out to outdo everyone else with their own maximizing of daily pleasure,” says Wilson.

And it wasn’t long before that lifestyle had a soundtrack to accompany it. Willie Nelson had already hung around Nashville for a decade and had written some country classics before trekking down to Austin to see what it was all about. Before Willie’s first Armadillo show, the Austin American-Statesman’s Townsend Miller wrote in his country music column of the appearance of Nelson on a psychedelic poster and wondered about that night’s inevitable collision of rednecks and long-hairs, the two warring camps that shared no common ground in any other place in the United States in the 1960s or ’70s. Only in Austin could the music bring the two together.

Almost as soon as the joint opened, a new brand of country/rock music began to be associated with it and its bohemian city. Musicians began to converge on the city where they could get a fair listen: Jerry Jeff Walker, a New York veteran of the psychedelic band Circus Maximus; Doug Sahm, a native Texan who’d spent several years as a rock star in San Francisco fronting the Sir Douglas Quintet;, Michael Murphey, a rocker with country roots and a difficult to categorize sound, along with dozens of other musical misfits. And then Willie Nelson abandoned Nashville and returned to his Central Texas stomping grounds. Willie inadvertently found himself to be the leader of an outlaw musical movement that had nothing in common with what was going on in Nashville. It was later dubbed “redneck rock” or the “cosmic cowboy” sound, a new mix of traditional folk, tejano, blues, pop, psychedelia, you name it. Whatever it was, it wasn’t quite country and it wasn’t quite rock. Simultaneous with this new genre came new, creative practitioners of established sounds like the blues, with bands like The Fabulous Thunderbirds and Paul Ray And The Cobras setting up shop in town. Any and all of these styles or sounds could be heard at the Armadillo, which wasn’t a particularly attractive place inside or out, not that that really mattered, you couldn’t even see it from the street. “Armadillo was an aberration that couldn’t have happened anywhere else,” remembers Wilson. “A convergence of a whole bunch of people wanting to have a real unusual playhouse, based more on fantasy than any kind of business acumen. It was a free fall kiddyland of people that were high and very idealistic.” 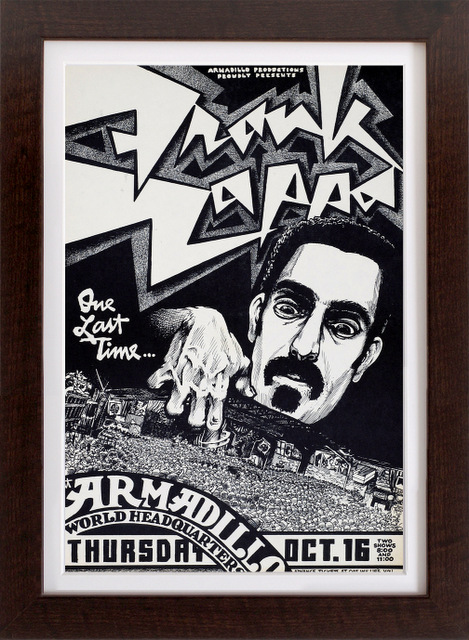 Among the new Austin artists gaining recognition were singer/songwriters like B.W. Stevenson, Steven Fromholz, Kinky Friedman, and bands like Greezy Wheels, Asleep At The Wheel, and The Lost Gonzo Band. Gonzo songwriter Gary P. Nunn even wrote a song called “London Homesick Blues,” which sang the praises of the place and pretty nicely got to the heart of the whole Armadillo experience: “I wanna go home with the Armadillo/Good country music from Amarillo and Abilene/The friendliest people and the prettiest women you’ve ever seen.” The city even produced its own new sound on radio in KOKE-FM, calling the new format “progressive country.” There was not always any rhyme or reason to the musical pairings at the Armadillo, but that was half the fun. Austin’s western swingers, Alvin Crow And The Pleasant Valley Boys actually opened for one of the Bruce Springsteen shows. But such double bills made for just another night at the ‘Dillo. Hippie rock band Commander Cody And His Lost Planet Airmen once shared a bill with country’s Waylon Jennings, and British punkers The Clash once shared the stage with Texan Joe Ely. In 1974, a new show for public TV spawned from the concert video being shot at the Armadillo had gone into production called “Austin City Limits.” All of the artists that frequented the Armadillo were now being seen coast to coast, and were selling records accordingly. 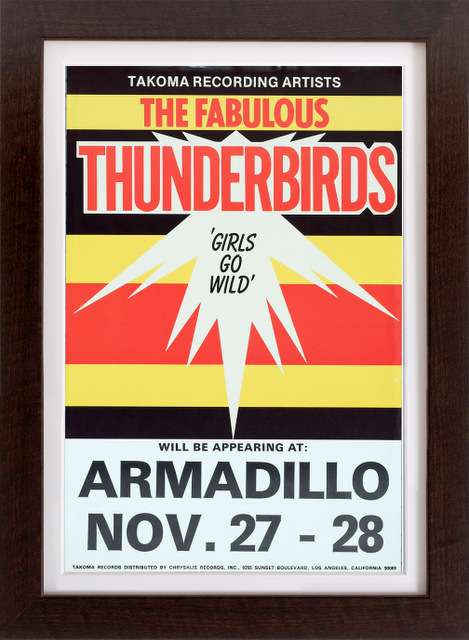 The series still uses Nunn’s “London Homesick Blues” as its theme. Recognition outside of Austin began to come in, as articles about this happening little place in the heart of Texas started showing up in magazines like Sports Illustrated and Rolling Stone, in which Wilson described what was so special about armadillos and hippies: “Armadillos and hippies are somewhat alike, because they’re maligned and picked on. Armadillos like to sleep all day and roam at night. They share their homes with others. People think they’re smelly and ugly and they keep their noses in the grass. They’re paranoid. But they’ve got one characteristic nobody can knock. They survive.” As the place became established, all of Austin’s music scene began to explode, with numerous other live music clubs opening and succeeding, or as Wilson puts it, perhaps a bit more eloquently, “Austin went from zero places to hundreds of places. It went from less than a ooch to more than a gob in eighteen months from the time Armadillo started.” Austin music was doing well in the general sense, but the Armadillo rarely actually made any money. Concert tickets were always cheap, and, quite often, money had to be spent before it came in. In 1976, Wilson moved on and was replaced at the helm by Hank Alrich. In 1977, the Armadillo filed Chapter 11 bankruptcy and was forced to lay off many of the employees just to keep afloat. Somehow, through it all, the determination to keep the music coming stayed alive in all who worked there. The Armadillo’s dedicated staff, would sometimes go many weeks without paychecks, occasionally accepting food instead. The communal atmosphere was all a result of the collective belief that the cause of providing a really cool place to hang out was indeed a noble one. 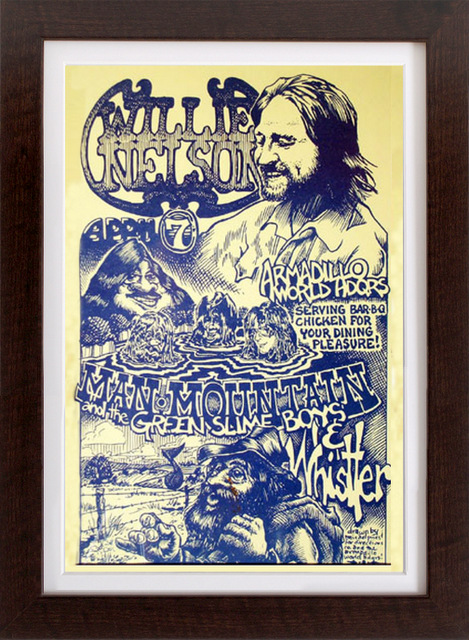 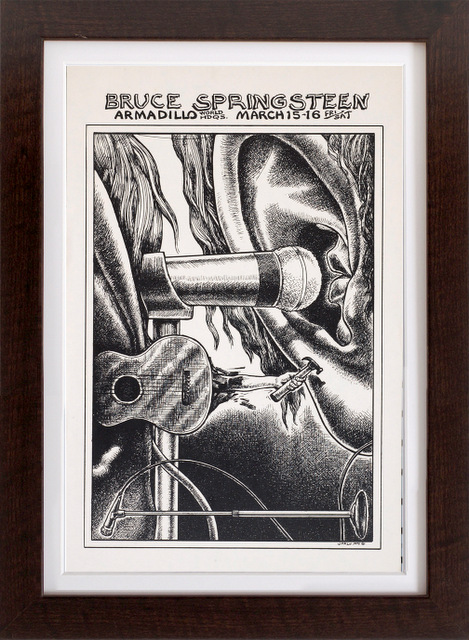 In the late seventies, after the Cosmic Cowboy sound had died down, Armadillo continued to play host to an eclectic mix of Texas musicians, as other difficult to categorize players like Joe Ely, Uncle Walt’s Band, and Too Smooth took the stage. National acts found their most significant followings to be in Austin, so quite a few made the Armadillo something of home base. Commander Cody And His Lost Planet Airmen, blues legend Freddie King, Shawn Phillips, The Charlie Daniels Band, Frank Zappa and Van Morrison all played frequently at the ‘Dillo.

The party came to an end after ten years when the perennially patient landlord had a much better offer for the property, and could no longer justify keeping the struggling business at the location; he’d been renting the place without a lease. The last night at the Armadillo was also the last night of 1980, with Commander Cody And His Lost Planet Airmen, Asleep At The Wheel, Maria Muldaur, Austin magician Turk Pipkin, and the Austin legend, Kenneth Threadgill bringing it all home.